Community members in Washington’s Methow Valley share their stories of coping with and adapting to summer’s wildfire smoke season in a new public art installation called The Fifth Season, which was recently unveiled at the Winthrop Public Library. Here, you can hear each participant's audio story and read more about them.

The Fifth Season project is a collaboration between Clean Air Methow and the UW Interdisciplinary Center for Exposures, Diseases, Genomics & Environment, part of the UW Department of Environmental & Occupational Health Sciences.

“I’ve seen bears out there, birds, and other wildlife that were trying to get away from the fire. There were animals that died from the fire. Words don’t have any meaning when it comes to seeing something like that.”

Kathy Moses grew up on the Colville Reservation where wildfires have always been part of life. But Kathy has noticed many changes since she was younger. There's less snow. It's windier. The fields dry out sooner. And there are larger fires.

Now, during wildfires, Kathy is usually working. She's a communications specialist and public information officer. As internet access is limited and other forms of communications can be disrupted when cell towers and power lines burn down, she updates physical information boards that people rely on.

During wildfire and smoke events, she’s often in the worst place a person can be: outside. Even though this has taken a toll on her health, Kathy perseveres with her important work because she sees it as a public service and a responsibility to her community.

“I’m concerned that my children are developing a fear of being outside and growing up with a different understanding of nature and its impacts than I grew up with. There’s less of a carefree existence when we’re hit hard by wildfire.”

When they moved to the Methow Valley, Dr. James Wallace and his wife weren’t thinking much about wildfires and the potential damage they could cause. That was until two years later, when their home burned down during a fire.

Dr. Wallace now understands from firsthand experience the serious impact that wildfire and smoke events can have on both physical and mental health.

As a family doctor, Dr. Wallace provides affordable health care to people across Okanogan County. He describes the kind of physical and mental health concerns he hears about during wildfire and smoke events, and a frontline intervention that can help make things easier.

“Every place you live has something, whether it's tornadoes or hurricanes or whatever it is. Wildfire smoke is just part of our life. A couple years ago, it felt a lot more stressful because we didn't know how to plan for it. And now we just work it into our plans.”

Colm Godwin was born in 2014 and is a proud resident of the Methow Valley. He lives with his parents, Cara and Eric, who were drawn here by the natural beauty and mountain air.

Initially, wildfires didn’t seem to pose a major problem. But, when Colm was only 7 weeks old, the largest-ever single wildfire in Washington state broke out—the Carlton Complex fire. The smoke lasted for many weeks, and it was especially challenging for the Godwins to adapt while caring for their infant, who was experiencing difficulty breathing.

After two trips to the emergency room, Colm was diagnosed with asthma.

Given the annual occurrence of fire and smoke events, the Godwins became experts at protecting Colm, including making their home impermeable to smoke, filtering their indoor air and regularly monitoring air quality to decide whether it’s safe for Colm to be outdoors riding his bike and playing. 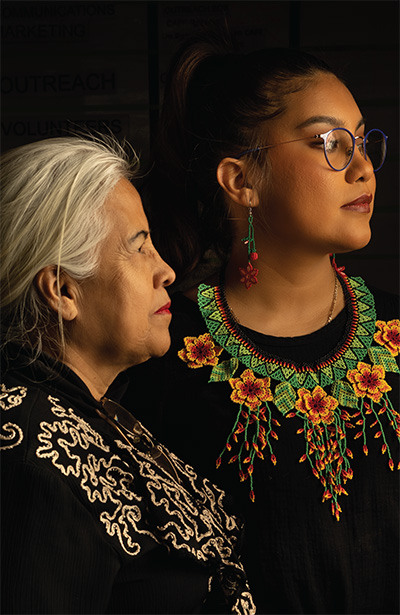 Alma Chacon and Laura Rivera, Community for the Advancement of Family Education (CAFE)

“Three years ago, we had a listening session here in town. We gathered about 30 community members to talk about what they knew about wildfires. What became pretty evident was that our community was not yet informed and had very little information about the causes and impact of wildfires.”

When she was younger, Laura Rivera walked to Wenatchee High School with her eyes welling with tears and her throat burning from wildfire smoke. She was surprised that neither teachers nor school administrators mentioned anything about it. Laura was born in Mexico and moved to Chelan County when she was 3 years old. She says she's seen wildfire smoke every year but never had much information about its health effects.

Alma Chacon and Rivera both work with CAFE, which focuses on advancing family and community growth through outreach on topics such as wildfire preparedness.

Alma has seen increases in the level of involvement and progress the community has made over the past couple years after persistent efforts to build awareness by organizing various events and activities.

But Laura adds that when she sees people in the fields, working in thick smoke with nothing but bandanas tied over their noses and mouths, she knows there's still work to be done.

“Building resilience in our communities against wildfire smoke is part prevention and part preparedness.”

Soo Ing-Moody studied wildfire resilience in rural communities as a graduate student in Germany. Little did she know that all the challenges that she helped communities navigate in other parts of the world would meet her at home years later, when the 2014 Carlton Complex wildfire broke out.

She recalls being chased by reporters and frequent meetings with the police and firefighters. Winds were blowing. The electricity went out. Communications broke down. Thick smoke settled in.

There have been more wildfires since that crisis, and Mayor Soo remains committed to helping the community prepare for not only fire, but smoke as well.

From his lengthy career working in fire management and forestry, Cody DeSautel brings an expert’s perspective on fires in the Methow Valley region. He begins with a rich historical context of fire in the region dating back to the time when there were significantly more Indigenous inhabitants on the landscape.

He sheds light on fire suppression policies from the 1800s to 2000s and explains why wildfires may be increasing in intensity in recent years.

He talks about his early memories and personal experiences with wildfires, and what he does to protect himself, his department and his community.

He also stresses the importance of increasing awareness in the community of the factors besides wildfires that contribute to smoke and poor air quality.

“We found ourselves faced with a billowing wall of smoke. It was ominous and large, much like a wave you would associate with a tsunami.”

Venable recalls the time he and his family saw a “billowing wall” of smoke after returning to the Methow Valley from vacation. When he saw the fire, he felt a sense of despair for what it represented: yet another season of fire, a season that his children refer to as the “fifth season.”

As superintendent of the local school district, he observes that there is a shift in how families make decisions about planning summer events and what they anticipate around the beginning of the school year.

Tom sheds light on how the school district makes informed decisions based on what they’re experiencing and in consultation with organizations like Clean Air Methow to ensure that students, staff and community members have access to clean air.

He also talks about the role of a device that you might hear in the background if you listen closely, and he shares his plans for this year's smoke season. 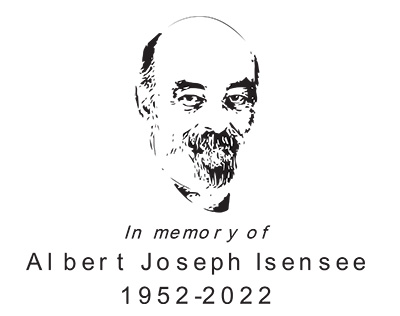 “It’s just a fact of life here. So, if a person chooses to live here, they better figure out ways to deal with it.”

One night in 2020, Albert and Hendrika Isensee were awakened by a knock at their door. It was the sheriff. He told them they should prepare to evacuate. Outside, an approaching wildfire lit up the night sky.

That night, the Isensees were lucky. Their house was spared. However, the persistent problem of wildfire smoke posed a very serious issue for Albert, who suffered from multiple cardiovascular and respiratory conditions.

As a resident of Okanogan County since the age of 5, Albert had no plans to leave. He was able to experience symptom relief through the use of indoor air purifiers during smoke events and year-round.

Albert passed away during the course of this project, but his wife encouraged us to include his voice as he had been enthusiastic about sharing his story.