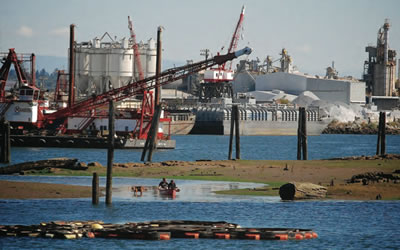 The health impact assessment (HIA) focuses on health changes that may result from the proposed cleanup and makes recommendations about how to minimize health impacts, maximize health benefits, and reduce health disparities in the affected populations.

The Final HIA report produced by the research team can be used to inform local decision-makers, especially City of Seattle, King County, and Port of Seattle. The research team also produced detailed technical reports for each of the four populations (Residents, Tribes, Fishers, and Workers) potentially impacted by the Duwamish Cleanup. An additional technical reports provide information about EPA-proposed institutional controls and the HIA resources and methods.

More than a century of industrial and urban wastes have contaminated water, sediments, beaches, fish, and shellfish in the lower Duwamish River with a mix of 41 toxic chemicals. In 2001, the EPA placed 5.5 miles of the lower Duwamish River on the Superfund National Priorities List. A risk assessment identified four chemicals of most concern for human health: polychlorinated biphenyls (PCBs), carcinogenic polycyclic aromatic hydrocarbons (cPAHs), arsenic, and dioxins and furans. The major pathways of concern are resident fish or shellfish consumption and shoreline or sediment contact.

The EPA released its Proposed Cleanup Plan for overall site cleanup on February 28, 2013, and accepted public comment on the Plan until June 13, 2013. The EPA expects to issue a final cleanup order in 2014.

The HIA was reported in three stages:

This project and report is supported by a grant from the Health Impact Project, a collaboration of the Robert Wood Johnson Foundation and The Pew Charitable Trusts; and also by the Rohm & Haas Professorship in Public Health Sciences, sponsored by the Rohm & Haas Company of Philadelphia.

The views expressed are those of the authors and do not necessarily reflect the views of the Health Impact Project, The Pew Charitable Trusts, the Robert Wood Johnson Foundation, or the Rohm & Haas Company.