This five-year project, jointly funded by the National Institute of Environmental Health Sciences (NIEHS) and the National Institute on Aging (NIA), has the primary goal of understanding the effect of air pollution on Alzheimer's disease and the aging brain, including molecular and structural pathophysiologies, cognitive decline and dementia risk.

The study will leverage the Adult Changes in Thought (ACT) cohort data, including extensive genetic data, decades of medication histories and participant residential histories. The ACT cohort data will be combined with spatially and temporally resolved estimates of ambient concentrations of air pollution (PM2.5, O3, NOx, NO2, CO) at ACT participant residences.

We will deploy new, low-cost air monitors in the Puget Sound area and use these new data to refine our models, while leveraging over 40 years of existing ambient air pollution monitoring data in the greater Puget Sound area.

Another project, Exposure Optimization for Epidemiological Cohorts, builds off of this ACT-AP project. The project aims to learn how to best design exposure assessments and optimally analyze them to make recommendations on the most cost-effective and high quality assessments for understanding air pollution health effects.

Below is a timeline of our expected study activities over the next five years.

The study is a collaboration between the Kaiser Permanente Washington Health Research Institute and the University of Washington. The study participants enrolled in the ACT cohort have been closely followed for decades by Kaiser. The cohort consists of over 5,400 participants with autopsies having been completed for over 740 participants.

Below is an illustration of the various types of information that have been collected from ACT cohort participants. Researchers from different specialties have leveraged the ACT cohort data to conduct research examining variables such as cardiovascular risk factors, physical activity, various medication uses, nutrition and blood vessels. To learn more about the ACT cohort, please visit the Kaiser Permanente Washington Health Research Institute. 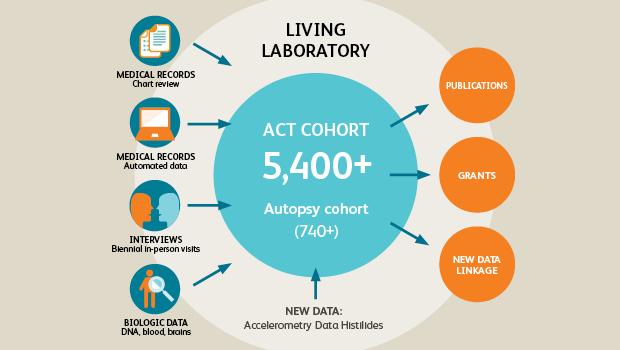 Researchers analyzed autopsy specimens from 832 deceased participants enrolled in the ACT study. They found a suggestive increase in the odds of having more serious Alzheimer’s pathology, as defined by neuritic plaques, in those participants with relatively higher exposures to fine particulate matter. However, when the researchers looked at other neuropathological markers relevant to Alzheimer’s, such as tau tangles, results were conflicting, rendering the overall study findings inconclusive.

The researchers suggest that because of the low variation of air pollution levels at the residences, the study may not have had enough statistical power to estimate adverse neurological effects of the low exposures experienced by the cohort. They also suggest that the known risk of Alzheimer’s disease linked to fine particulate matter may be related to mechanisms other than the formation of tau tangles and amyloid plaques. Finally, more advanced statistical methods are needed to untangle these autopsy findings from the well-understood premature death associated with particulate matter exposure. Going forward, ADRC and ACT researchers aim to enroll and follow individuals from more diverse populations with different risk factor profiles to see whether these results can be generalized more broadly. (via UW Memory and Brain Wellness Center/ UW ADRC) 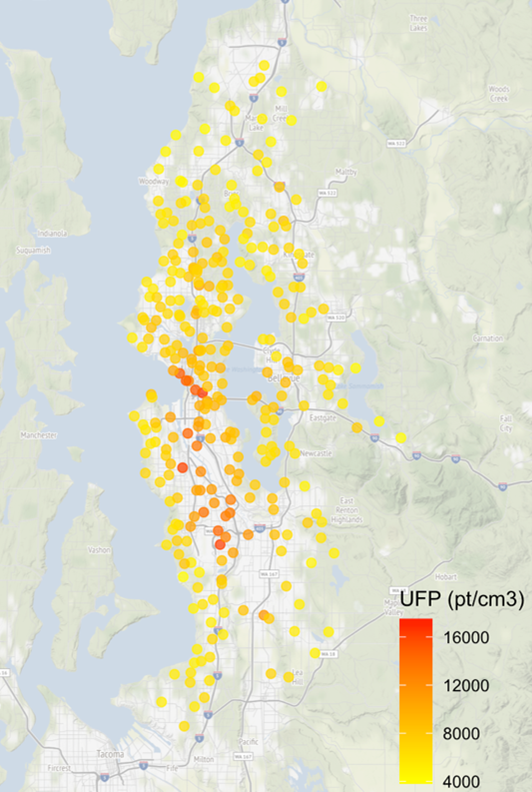 Thanks to an administrative supplement funded by the National Institute of Aging, we completed a mobile monitoring study in the greater Puget Sound region in March 2020. Eight instruments measuring particles and gases were installed in a vehicle and driven along nine fixed routes with 308 stops. The measurements include different sizes of particles, particularly ultrafine particles (UFP), nitrogen dioxide, carbon monoxide, and carbon dioxide. Sampling locations were chosen near ACT-AP participant homes and were selected to cover different geographic areas and land use types. Monitoring was conducted in all seasons, all days of the week, and most times of the day over ~280 driving days. These data have been combined to estimate annual averages of pollutants at the 308 stop locations. The map to the right illustrates fine-scale ultrafine particle (UFP) annual average measurements at these stop locations. The instrument measured particles in the particle size range 20-1000 in diameter and the units are a number count, i.e. particles per cubic centimeter (pt/cm3). We found higher UFP concentrations downtown, near the airport, and along highways. 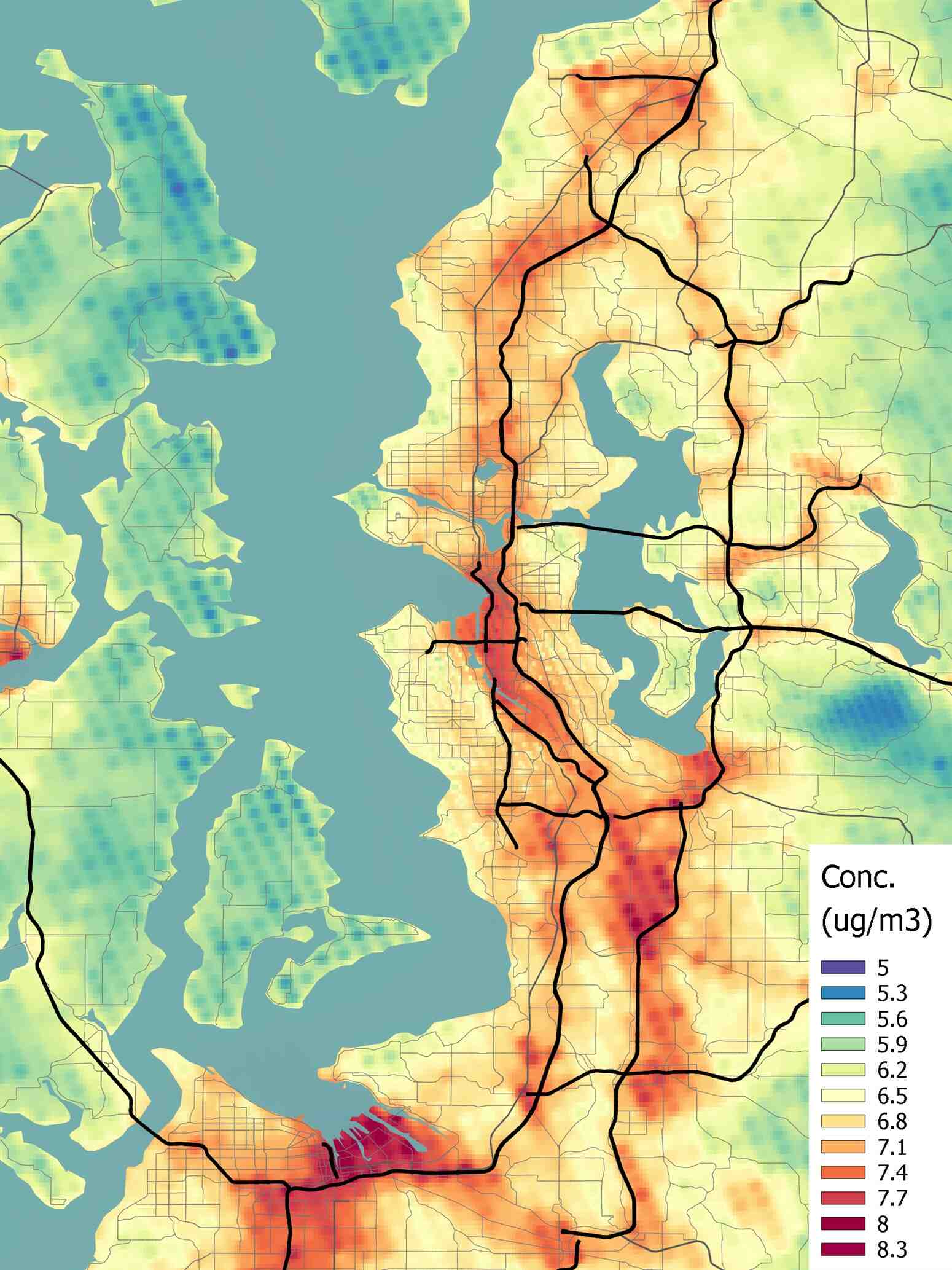 Development of PM2.5 exposure predictions to obtain subject-specific long-term average exposures has been completed. The modeling region extends from Tacoma to the US-Canada border and encompasses the greater Seattle area where most ACT participants and community members live. The model leveraged data from 50 regulatory monitors all the way back to 1978. These predictions of long-term average of PM2.5 are being used for inference about the effects of exposure on brain health. The map to the right shows average PM2.5 predictions for the time period.

With the help of Kaiser Permanente, address history for ACT participants is nearly finalized. Almost 37,000 addresses going back to 1989 have been collected from multiple sources including historic billing records, ACT study records, and Lexis Nexis. To fill in gaps and assess address data quality, surveys have been sent to a sample of current ACT participants.

As of October 2018, a real-time visualization of our low-cost air monitoring data has been launched. Please visit our our dashboard to view your neighborhood-level air pollutant data and find tips to reduce your exposure to air pollutants. You can also report air events, such as local fires, smoke, smells, etc. at our new dashboard. Click here!

As of September 2018, we have collected air pollution data in about 100 locations in the Puget Sound region. Please see our latest map illustrating the locations we have monitored through 2018. These locations include community volunteers (aqua stars), CAMPS volunteers (pink stars), and ACT participant (yellow stars) and our fixed monitors that are co-located with Puget Sound Clean Air Agency monitors (white circles). 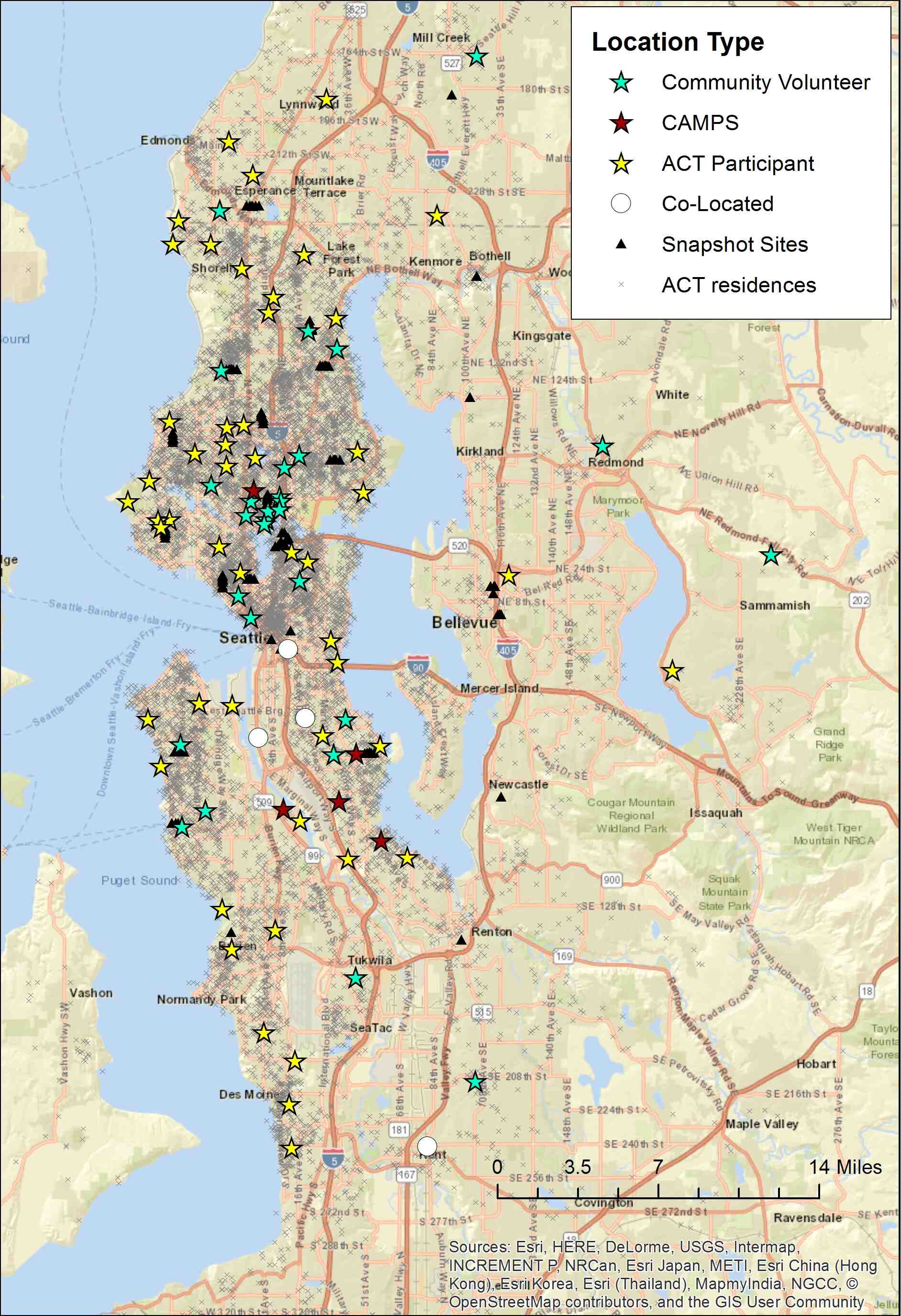 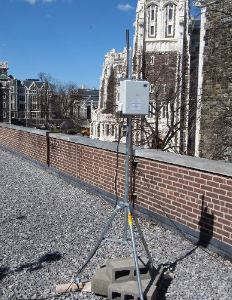 The photograph to the left shows one of the air pollution monitors. The monitor needs to be located outdoors in a secure location such as a backyard, behind a fence, on a roof, or on a balcony. The monitor needs to be plugged in to operate. We will deliver and pick up the equipment. Its measurements will be transferred over a cellular network to the University of Washington.

If you would like to volunteer, please fill out this survey.

As of December 2017, we have collected air pollution data in about 30 locations in the Puget Sound region. Please see our latest map illustrating the locations we have monitored during 2017 (in pink stars) and our fixed monitors that are co-located with Puget Sound Clean Air Agency monitors (in yellow stars). 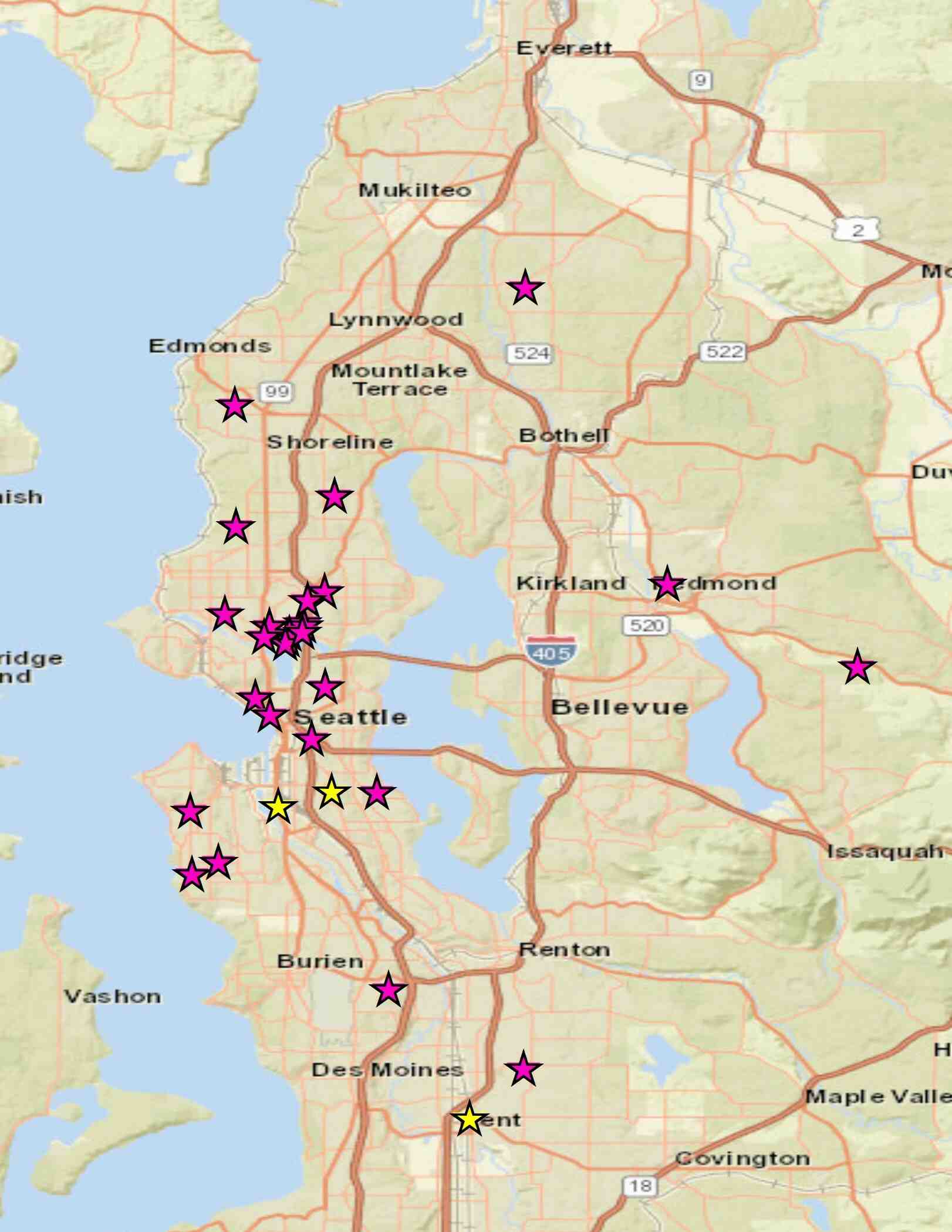 As of September 2017, the National Institute of Environmental Health Sciences (NIEHS) has approved funding to expand and enhance the exposure assessment activities of the study by incorporating community-based participatory research (CBPR) in the Puget Sound region. If you would like to learn more about this new study, please visit Community Air Monitoring in Puget Sound (CAMPS).

Air Pollution and Alzheimer's Research: The Ins and Outs