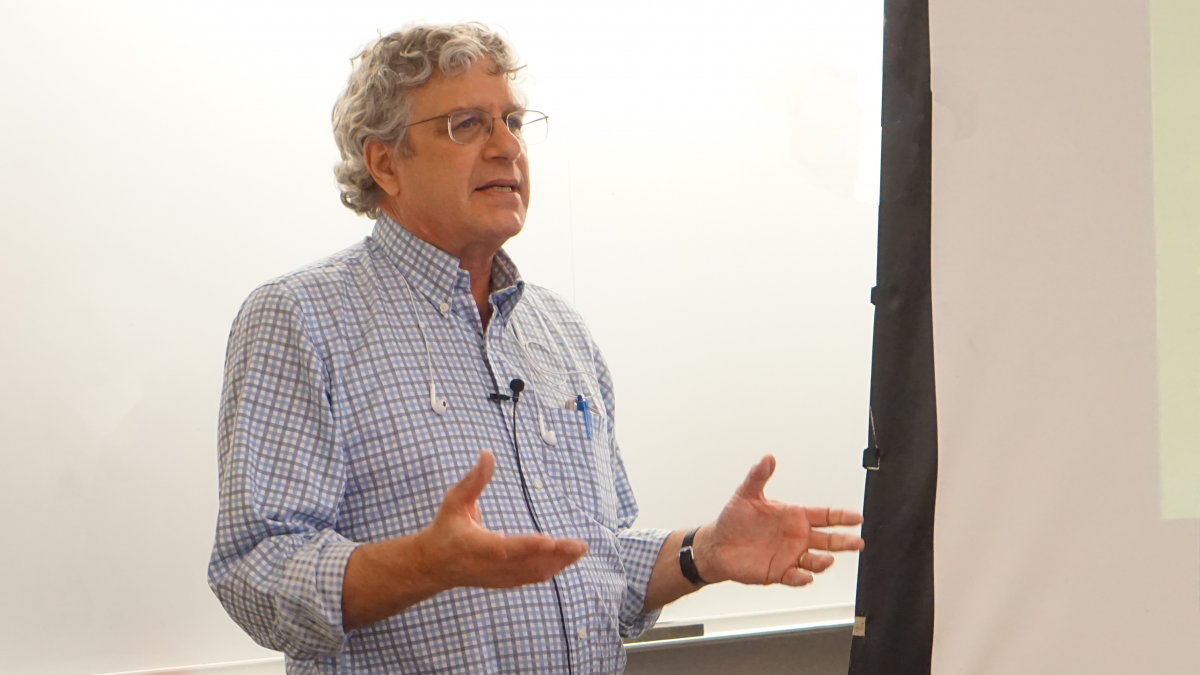 When Michael Rosenfeld started college, he planned to become a labor historian. But his cell biology professor at Grinnell College turned him on to science.

“ I have loved teaching about nutrient metabolism and nutrition. When the class as a whole does well—when they are able to stay with you and ask really good questions and do well on the exams—that is rewarding. ”

His early captivation with cell and molecular biology inspired his wide-ranging career exploring the role of nutrition in health and the impacts of air pollution and respiratory infection on heart disease and stroke.

Rosenfeld is retiring this June after nearly 30 years as a UW professor in the Nutritional Sciences Program, the Departments of Pathobiology and Pathology and the Department of Environmental & Occupational Health Sciences (DEOHS).

“Mike is a very accomplished vascular biologist who has dedicated his career to the understanding of atherosclerosis as well as the role of the nutritional sciences,” said DEOHS Professor Joel Kaufman, who has collaborated with Rosenfeld.

From nutrition to atherosclerosis

Rosenfeld first got interested in nutrition by studying the importance of vitamin D in bone development as a master’s student at the University of Vermont.

That spurred on his PhD in Nutritional Sciences at the University of Wisconsin, where he investigated nutrient metabolism in blood vessels—a self-directed project in more ways than one.

To get his research materials, he biked to the local Oscar Meyer factory each morning to cut aortas from pigs and cows.

“I put them in a bucket of ice, put it on the back of my bike and rode as fast as I could back to the lab,” he said.

That work sparked his deep interest in atherosclerosis, the hardening of arteries that is a major cause of heart attacks and strokes.

A love of teaching

Rosenfeld first came to UW in 1982 to do a postdoc with the late Russell Ross, a leading atherosclerosis researcher and the chair of the Department of Pathology at the time.

Then, in 1992, UW recruited Rosenfeld to teach in the Nutritional Sciences Program, with appointments in the Departments of Pathobiology and Pathology.

Over his nearly 30 years of teaching in Nutritional Sciences, Rosenfeld has been energized and inspired by working with students in his classes on nutrient metabolism and food safety and health. He has found it just as rewarding to train junior researchers in the lab, where he mentored about a dozen PhD students and about two dozen postdocs.

“That’s the legacy for me, having worked with lots of great young, smart people,” he said.

Rosenfeld joined DEOHS in 2006, in part because of his interest in how air pollution contributes to cardiovascular disease.

The move combined his previous work on the pathology of atherosclerosis with an environmental health approach, and fostered collaborations with Professors Terrance Kavanagh, Joel Kaufman and others in the department.

Rosenfeld developed mice that were genetically altered to show signs of atherosclerosis, and a way to characterize the blood vessels of these mice for signs of the disease.

That mouse model helped establish how air pollution impacts atherosclerosis in his collaboration with Kaufman, where the two tested the effect of diesel exhaust on the mice.

“We made an important contribution to getting people to understand that air pollution doesn’t just cause respiratory problems,” Rosenfeld said.

“He has been a very important, valuable collaborator, and we’ll miss his contributions to the science of the environmental features of cardiovascular disease,” Kaufman said.

Rosenfeld also showed how a form of chlamydia that affects the lungs, called Chlamydia pneumoniae, contributes to atherosclerosis in mice, in collaboration with UW Global Health Professor Lee Ann Campbell.

“It wasn’t the normal approach to cardiovascular research,” he said of his two major research projects. “It was only being here at UW that gave me the opportunity to do this, because there were other faculty who were interested in these areas.”

“His leadership and positive spirit have made a lasting contribution to our faculty, school and UW overall,” said Michael Yost, DEOHS professor and chair.

In the course of Rosenfeld’s career at UW, his wife and three sons have all worked or studied there. As he retires, he’s looking forward to spending more time with them, as well as his two dogs, Gabriella and Buckley.

In keeping with his nutrition background, Rosenfeld loves gardening and cooking, and his wife has an Associate Arts degree in baking: the two have already planted this year’s rhubarb, peppers and eggplant.

Though the pandemic makes their plans uncertain, they hope to check off some of their dream travel destinations in the coming years, including Italy, southern France, Scotland, Ireland and New Zealand.

Rosenfeld also hopes to continue volunteering to mentor science teachers in the Seattle School District, which he began through the ATHENA teacher training workshops offered by the Interdisciplinary Center for Exposures, Diseases, Genomics and Environment, part of DEOHS.

“Overall, being a professor at UW has been a really great career,” he said. “I don’t have any regrets whatsoever.”